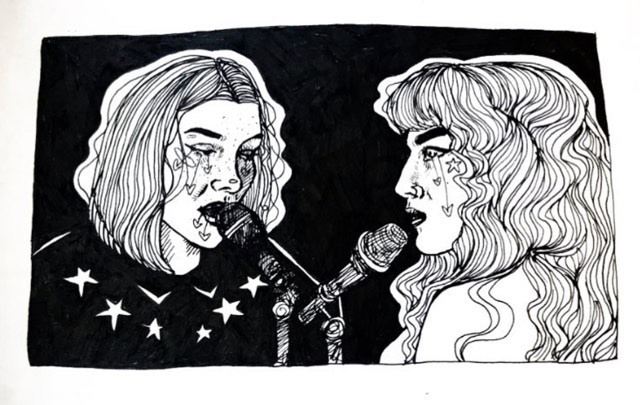 Where are the women in Liverpool’s music scene? Why is it that in a city famous for its music, we celebrate one that doesn’t even represent half of its population.
I’m not just talking about bands, but behind the scenes too. Where are the female lighting technicians and sound engineers , I’m not saying it’s a conscious effort to keep women out, but year after year, on stage and off women still only make up a small percentage compared to their male contemporaries.

John Lennon infamously told The Liverbirds that ‘‘girls can’t play guitars.’’ In 2020 we haven’t come much further, you only have to take one look at your average Friday night bill to notice that it is still, very much a “boys club.”

I spoke to Eve Machin and Ella Fradgley, creators of @wherearethegirlsbands. They started the page to promote and celebrate female-identifying and non-binary musicians. One poll from October 2019 found 78% of women on Liverpool’s music scene felt discriminated against due to their gender.

Why did you create @wherearethegirlbands?
A lot of the gigs we’ve played have been male dominated, in that kind of environment, you become subjected to subconscious slights like; not being introduced properly, asked if you’re able to set up your own instruments or even carry them, being left out of discussions about how the sound should be. Often, I’ve been completely ignored next to my male bandmates in my other band; initially refused entry or passes to venues because they assume I’m their girlfriend.

Is it getting better or worse?
It’s an issue that isn’t going anywhere unless people talk about it.
Since starting @wherearethegirlbands, our own awareness of femxle creatives has infinitely increased, but that’s probably because we went looking for them. I do think Liverpool is a city whose music scene is constantly expanding and there really are opportunities everywhere- it’s such a diverse and welcoming city. There are also projects like ours – Bitch Palace run events with exclusively fxmale line-ups, as does the monthly event WeWantWomen. There’s definitely an awareness of the issue in Liverpool, but I feel like it’s an inevitable and universal problem that just comes with inherent sexist attitudes.

What do you think can be done to change this?
Discussion and empathy will go a long way; more opportunities and spaces for fxmale musicians to have their work promoted and to be free to create.

So, female musicians, sound engineers, lightning technicians; you’re definitely out there. Create the space, make room. The more people discuss, share experiences and come together and with time create a collective, safe space for those who need it. There are other pages similar to Eve and Ella’s such as @bitchpalacepresents and @thegoddessprojects that also promote and support female creatives. Research and reach out. And to promoters and managers, the more proactive in providing opportunities, the more we can explore other narratives and other voices. There are stories to be told; let them be.

No comments to show.